We are grateful for any donations you can make to help our dogs.
You can donate via the PayPal below

We thank you for your support!

Add the IGive button and select SHR as your charity 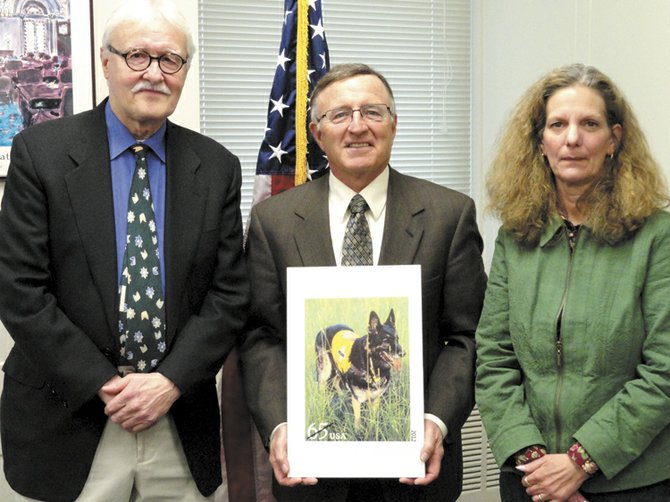 Skaneateles resident Chris Buff, far right, poses with State Sen. John A. DeFrancisco, middle, and artist John Thompson at a Feb. 2 meeting at the senator’s Syracuse office during which he gave both Buff and Thompson citations for excellence. DeFrancisco holds a picture of a new $.65 postage stamp depicting Buff’s dog, Mittru, a German Shepherd trained as a search and rescue K9.

Skaneateles— The U.S. Postal Service recently released four $.65 postage stamps honoring “Dogs at Work,” and a Skaneateles German Shepherd named Mittru was honored as one of the four.

Mittru, owned by Chris and Brian Buff, was a search and rescue K9 for Cayuga County Highland Search and Rescue. He was trained to find live people as well as dead, participated in the Ground Zero efforts immediately after 9/11, and worked on hundreds of cases in every type of terrain from Long Island Sound to the Adirondacks and as far west as Allegheny state park.

“Mittru had just what it takes for search and rescue. He was a German Shepherd in Lab’s clothes I think sometimes,” said Chris Buff. “He was not aloof at all, very outgoing. He loved the camera — he was on the news a lot during his career — he was just a ham.”

Mittru was born at Chestnut Ridge Kennels in Sennett. “They have wonderful dogs, and it’s amazing that a dog of his caliber came basically from a pet dog,” Buff said.

The name “Mittru” — Buff was told by her son — was Celtic and meant “patron saint of the hunt.” But a few years later, when Buff told that to a reporter, her son said, “Mom, you believed me!”

“So it doesn’t mean a darn thing,” Buff said.

Buff has been working in K9 search and rescue since 1979 when she was in the Air Force in Texas. She started working in New York state in 1993, and joined the Onondaga County Wilderness Search and rescue when it was founded in 1998. A few years later she switched to the Cayuga County Highland Search and Rescue team, which is based in Auburn, because it was closer to her home in Skaneateles.

“Our function is to help law enforcement or DEC rangers go throughout state and help locate lost or missing people, living or deceased,” Buff said. “It’s every type of terrain, 24/7, 365 days; snow, summer or winter, day or night.”

Dual purpose search and rescue dogs such as Mittru — meaning they find both the living and the dead — take typically one to two years to train. They need to have that “hunt drive” – a need to want to find an object no matter what’s coming at them, and go and go until they find the scent, Buff said.

They train with live people hiding from the dogs for missing persons purposes, and with bone fragments, teeth, cremated remains and similar items for the dead body recovery purpose, Buff said.

Mittru was one of the best search and rescue dogs around and participated in many high-profile cases, such as 9/11, locating a group of missing teenagers who drowned in Long Island Sound, and last year’s Auburn murder case of Katie Socci.

Buff said she is not exactly sure how Mittru was chosen for the Postal Service stamp. “I think it was a fluke,” she said. A friend of hers said Syracuse artist, and art professor at Syracuse University, John Thompson wanted to do a picture of a search and rescue dog, so Buff said he could do Mittru. She found out later that Thompson had been asked by the Postal Service to do it for a future stamp.

So in summer 2008, Thompson took pictures of Mittru, at that time age nine, the Postal Service made Buff sign nondisclosure agreements to avoid letting out the news of the upcoming “Dogs at Work” stamps, “and then we kind of forgot about it,” Buff said.

During the last days of 2011, Buff and her family saw some items about the stamps on Facebook — but were not officially notified by the Postal Service — and then when the four-stamp working dog series was released, Buff said she saw the news and said, “Hey, that’s Mittru!”

The official stamp unveiling was in Virginia. The Buffs were not invited, but there was a poster-size photo of Mittru’s stamp as part of the ceremony, which Chris Buff was able to acquire. She donated it to the Auburn Post Office, “because that’s where it belongs. Even though we live in Skaneateles, our team is based out of Cayuga County,” Buff said.

On Feb. 2, Buff and artist John Thompson were honored by State Sen. John DeFrancisco at a ceremony in his main office in Syracuse. DeFrancisco presented both with a New York Citation, honoring them for their outstanding efforts and achievements.

“Mittru was a skilled and dedicated dog that was extremely valuable in human search and rescues throughout our community and New York state. Now, his legacy will live on in this stamp. Mittru, and his dedicated trainer, have made Central New York very proud,” DeFrancisco told the Press.

Also on Feb. 2, Buff and Mittru were recognized by the Skaneateles Town Board at its semimonthly meeting.

“It’s an incredible service that search and rescue teams offer and that they selected a local resident’s dog who has been instrumental in searches just makes it that much sweeter,” Town Supervisor Terri Roney told the Press.

Roney said an official unveiling and celebration ceremony will be held in Skaneateles in the near future, and the offices of both U.S. Rep. Ann Marie Buerkle and DeFrancisco have said they are interested in attending. Plans are still being formulated.

“I am excited about [the Skaneateles ceremony],” Buff said. “It is a neat thing for Skaneateles to be able to say this dog came from here.”

Jason Emerson is editor of the Skaneateles Press. He can be reached at editor@skaneatelespress.com